A Primer on Modern Bike Lanes

We had some great comments in an earlier post referencing concerns about bike lanes. With that in mind, BFOC wanted to post some images of poor and well planned bicycle infrastructure. As stated in a prior post, most US cities were well behind the curve in attempting to develop a bicycle friendly network. The planners we’ve interviewed noted that their first designs weren’t always perfect, but with time, they were able to adopt changes in their engineering to better improve these systems. As any engineer will tell you, a problem only represents an opportunity.

Here are some of the solutions we’re advocating:

Bike lanes that are set too close to car doors, represent a problem for potential open door incidents. Several solutions have been developed to overcome this. The paint-only method is to stripe a buffer zone, as seen here:

Our preferred solution is to take this one step further and create a dedicated, or bounded bike lane:

Another problem was presented at intersections. If cyclists were left in a drivers blind spot at a stop, the potential for a right-hook collision could occur. Portland found four troublesome intersections and looked to Copenhagen for a solution. What they returned with was simple…the Bike Box. As Roger Geller pointed out in a prior interview, there have been no incidents since their application: 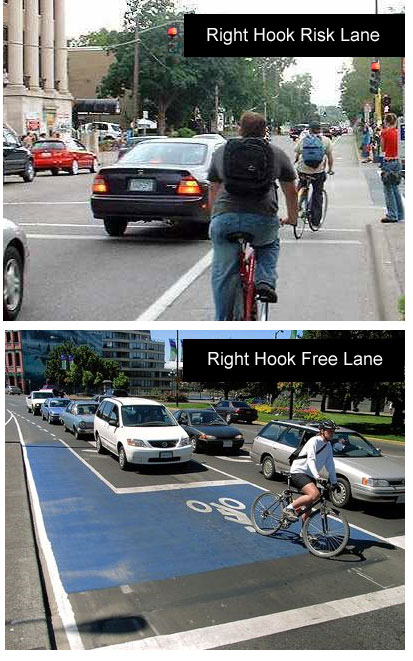 And here’s a video primer on how to use a bike box.

Debris in the Lane

A third problem referenced has been potential for debris in a bike lane. This can definitely be a problem, but one which also allows a simple engineering solution that Dallas already implements: the street sweeper. Dallas sweeps all streets in the CBD 5 nights a week, and its secondary thoroughfares once a month. If more is needed, another solution would be the creation of a private/public partnered “Friends of” group, similar to the “Friends of the Katy Trail”. Without the FKT, the public mainstay in Dallas would be little more than a gravel topped road. This organization not only raises private funds for the completion of the Trail, but helps the City of Dallas plan, build and maintain Trail improvements. And why would we assume private institutions would be willing to assist with upkeep and maintenance? Because the amenity of a good trail system is seen as a net plus for the neighborhood.

Lastly, we would like to focus on the overall implications of adopting a people-over-cars strategy for city planning. As noted in other BFOC articles, the number one worry Vehicular Cyclists have in regards to bike lane development is the lack of freedom to ride in any given lane with a car. While this may be a valid concern, the philosophy not only enables car-over-people planning, but promotes it. For years, we engineered humans out of city streetscapes to allow for faster, more efficient car travel. What we’ve been left with is 4 to 6 lane concrete moats that separate out communities, and leave people stuck in a perilous game of Frogger to simply walk to the store. The idea of putting people first in city planning has proven to not only increase economic development, but to bring culture and activity back to former concrete jungles. A planner from Vancouver recently visited Dallas and made the simple counter-intuitive statement, “Congestion is a GOOD thing.” And why? Slowing down traffic allows people to take in their surroundings, makes streets safer for crossing, and creates inviting sidewalks that people drive past and want to stop and walk around on. Imagine Greenville Avenue widened into a 6 lane road. Would you still want to walk along it, or dine at its patios? Where would you prefer to setup your small storefront on McKinney Avenue or Royal Lane?

And lastly, looking at the picture above, which would you as a beginner cyclist prefer to step out on?