Something we covered in the Bike Lane Primer article that I wanted to focus more on here is the concept in Urbanism known as Transect Zones. When we’re debating on how to properly build city infrastructure and specifically where bike lanes would work, one thing I’d stress is that how you build for one part of a city, is completely different from how you build in another part. This is a very timely issue, as members of BFOC are attempting to open a bike shop now, but are being hampered in receiving a Certificate of Occupancy by mid-century era zoning restrictions requiring a specific number of parking spaces for their retail space. More about that later.

From the Center for Applied Transect Studies

“A transect is a cut or path through part of the environment showing a range of different habitats. Biologists and ecologists use transects to study the many symbiotic elements that contribute to habitats where certain plants and animals thrive.”

New Urbanist use this model when defining the transitions between dense urban areas to open rural areas, and have identified 6 different Transect areas or “T-zones”:

Now the problem we see most often is that a generic plan for infrastructure and zoning is attempted for an entire city. This one size fits all approach is typically based on the T-3 “sub-urban zone”, which has larger land scales, separation of business and residency, greater distance from a core, and fragmentation of natural community. Developers in the past would attempt to contrive the latter by creating “gated communities” or themed suburban tracts which they hoped would resemble a natural organically created community. Ironically, retail zoned areas follow suit and create themed spaces that mock organic walkable communities (ie. Macaroni Bar & Grill feels like a small Italian villa until you walk outside into a sea of parking and wide concrete thoroughfares, with cars travelling 40 mph). Where I grew up in far North Garland, developers gave the area we lived the charming name of “Camelot”, and all streets were named for people and places from medieval folklore. Since there was no center for community to gather, children rode bicycles on neighborhood streets and were locked into a specific square area bordered by a larger concrete moats of 6 lane roads that few crossed without a vehicle. If retail existed, it was typically built the opposite from the town model, and only along the perimeter. This model is a staple of cars-over-people planning. Here’s a picture of one of the corner moats where I grew up…Ironically, it’s also only blocks away from one of the most ardent VC’s houses:

I’ll break down the components that make this a car-over-people environment. Most notably, 7 lanes on each side (which includes left turn lanes). These streets are marked at 40 mph, which if you take in account that many drivers (read: most) drift 5mph over posted speed limits, you’re nearing highway speeds that butt up to residential tracts. It’s miles from any public third space like a plaza, outdoor market, or civic center. Next, all retail is setback from the sidewalk to allow for parking. In the case of the grocery store, you have an added 50 to 75 yard moat separating the street and creating an added barrier. The environment is unwelcoming to anyone without a car. If you are too old, too young, or without means to own a car, you are either out of luck, or extremely inconvenienced. This area was first developed in the 1970’s, so its form is based on much of the ideas developed in mid-century planning.

Now here is an example of a street corner in Historic North Oak Cliff, which is relevant to the article in that BFOC members are attempting to open a bike shop here:

First of all, the city of Oak Cliff (which was later annexed by Dallas), was created around a streetcar line. What you see in this image was storefronts built in the 1920’s, directly in front of the streetcar track. What you don’t see are the homes which are less than 30 feet behind these retail establishments. We did away with allowing small business space to develop within a neighborhood in the 1950’s, preferring instead to separate businesses from homes and creating greater distances which required automobiles to travel. In other words, we engineered out the neighborhood tavern. Another thing to note, buildings are set flush against the sidewalk and street, making it very people-friendly, and inviting. Next, you’ll notice there are no parking lots. There was no need, as a streetcar allowed service to the areas, along with the fact that these were nestled into existing neighborhoods. Customers simply rode their bikes or walked. There were neighborhood theaters on most every corner with no parking lots. The first air-conditioned movie house in Dallas was the Texas Theatre on Jefferson Boulevard which opened in 1931 with a 2,000 seat capacity and not a single parking lot. Pretty cool, eh? We engineered exercise into our city planning. After you left the theater, you spent the rest of the day walking up and down the street window shopping, and enjoying community, then walked or rode a bike/streetcar home. Since we are a car-based culture now, New Urbanists have learned to continue developing parking lots, but to hide them at all costs from the store fronts. The last thing I’ll note is that these spaces have permeable exteriors (ie. glass) along the fronts, that make people want to window shop. Many buildings in the 1970’s were built like solid shells, and if they had windows, they were fully tinted.

Now for the problem. In order to fully embrace the car-first model, the city turned the once small two-way 4-lane street w/median, into a one way and removed the median. This created distance between neighborhoods and made the area feel unsafe to cross. This also had the effect of allowing cars to move at greater speeds through the community. Zoning was then added to require each retailer to have 1 parking space for every 200 square feet. If you want to find a way to kill small business, there’s no faster way than to make a mom and pop shop pay for additional space that has no potential for product placement. So what happens? Well, these storefronts stay vacant, and the fact that they exist on a one way street lessens the chance for visibility, further damaging the potential for sales. We have shops like this sprinkled throughout Oak Cliff. Fortunately, we have a very strong city council person in this district, and she’s working to overcome some of these obstacles, but you can see how we’ve managed to engineer out humans from the environment.

Now an example of a “Complete Street”, which put people-first: 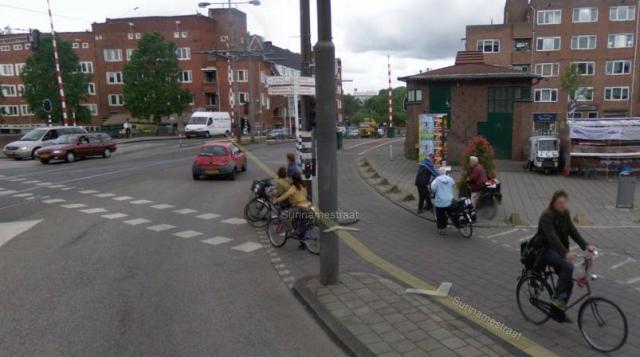 I grabbed this image from Google Maps. For fun, I suggest pulling up Google Maps, typing in Amsterdam, and then just drop the StreetView dude anywhere on to the city…this type of planning is everywhere. Ironically, Amsterdam is much denser than Oak Cliff, but they’re getting away with only four small lanes for cars. Now, for starters, the buildings, though taller, are no different in form than the ones we showed in Oak Cliff. They’re flush to the sidewalk with no visible parking. If they did away with the bike lane, removed the median, and turned the traffic into a one way street, you’d then have a car-first model. Life would dry up, and businesses would shutter shortly after. Instead, they’ve kept their wide sidewalks (which allows for patio dining and more), added a dedicated bike lane, a streetcar line, AND left room for cars. Another cool thing to note in this picture…the three white-haired people on bikes without helmets at the top right. Without bike lanes, they’d be indoors.

So what do we advocate for the North Oak Cliff street? First, return the streetcar. Next, turn the road back into a two-way street, extend the sidewalks, lower the speed limit, and allow for a dedicated bike lane. Lastly, drop the zoning requirement for needed parking. You will have then created a people-first model for city planning, one that brings out young and old, engineers in exercise, and doesn’t rely solely on fearless cyclists and cars to battle each other. It becomes an inviting environment, that feels safe. This model also educates drivers automatically to adapt and become aware of their environment.

Does this form work throughout the city? Absolutely not, which is why we’re not advocating alternative transit planning in areas that are sprawled out many miles from the city center. But in North Oak Cliff, we developed a people-first model for planning that began in 1887 and lasted 80 years. We then attempted to adapt a suburban, car-first model, that kept people indoors, and children away from the dangerous streets…the same modelVehicular Cyclists prefer. But just like Portland did, we can and will return to a people-first model for our community.