Poll: Should Colorado Boulevard be a 2 Lane “Complete Street” or 4 Lane “Vehicular Only” Street?

The Oak Cliff Chamber of Commerce is endorsing a plan to remove the City of Dallas’ 2011 Bike Plan recommendations and convert the portion of Colorado Boulevard from Bishop Avenue to Beckley from a 2 lane “Complete Street” to a 4 Lane vehicular only suburban modeled street. See the full recommendation and discussion, here.

Examples of the two types of street treatments can be found below: 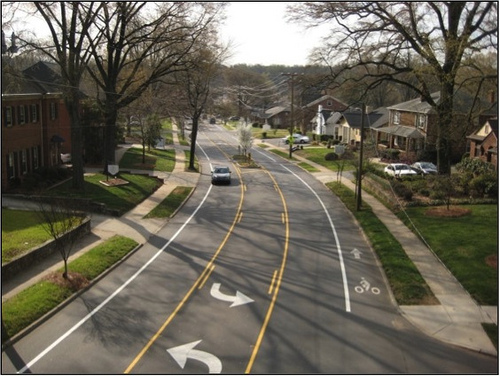 The Chamber claims that the roads vehicular-focus is needed to maintain high-speed access through the neighborhood for ambulance traffic. Though healthcare concerns are cited, a CNU study of wide streets noted that “the most significant causal relationships to injury accidents were found to be street width and street curvature”, an issue directly related to Colorado’s current configuration. Also, this consideration runs counter to road recommendations by the National Centers for Disease Control and Prevention who recommends cities implement bicycle lanes to curb obesity trends along with the Secretary of the Department of Transportation, Ray LaHood, citing Portland as THE model for 21st century US city planning. The Journal of the American Medical Association (JAMA), and the American Academy of Pediatrics (AAP) recently referenced complete street implementation by name or in principal, and the much anticipated Moving Cooler report released by the Urban Land Institute discusses the impact CS have on lowering greenhouse gases.

With the multitude of families bounding this street in the Kidd Springs neighborhood and East Kessler neighborhood, it’s surprising that measures would be made to endanger children and seniors who cross this street by maintaining a wider vehicular pathway which encourages higher speed traffic. Multiple blind curves exist on Colorado currently, and many pedestrians and bicyclists have been harmed by the streets current configuration. Also, we now know the economic impact of a “Complete Street” can be far greater than the alternative as small businesses have reported greater transactions, while residents and visitors enjoy a more aesthetically appealing street which has a direct affect on value of area homes.

Claims that emergency response times will slow have been vetted by the US Environmental Protection Agency, and a recent study from the American Journal of Preventive Medicine explored how sprawling development patterns have actually shown to increase EMS response time and delay ambulance arrival.

If road capacity and sharing ambulance traffic with a neighborhood street is a concern, an appropriate solution would be to simply direct ambulance traffic to the wider Beckley Avenue entrance. This option would also greatly reduce potential of mixing with traffic by families who use Colorado as their main access to Lake Cliff Park.

We know the numbers of bicyclists of all ages has increased exponentially throughout our community. When we build our streets in North Oak Cliff, we have to keep all ages and all users in mind as we want to build a network that has a long-term view of the neighborhood and the families who will continue to make Oak Cliff a great place to live, work, and play.