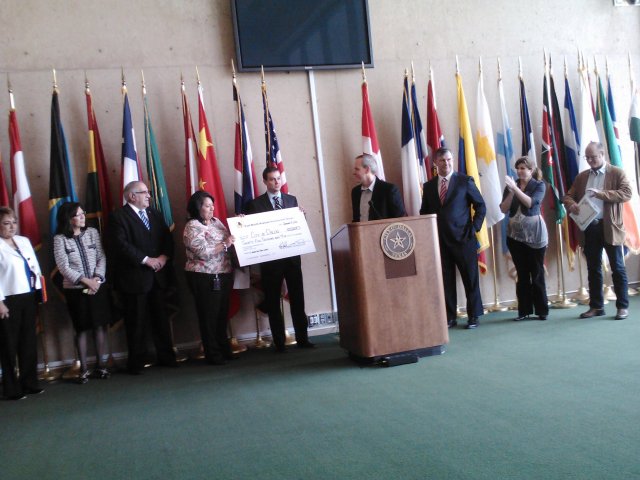 The entire City Council along with City Manager Mary Suhm and others were on hand to celebrate the fundraising campaign by the Fort Worth Avenue Development Group to stripe bike lanes that were recommended in the 2011 Dallas Bike Plan. Council member Alonzo spoke on how it was necessary for communities to come together to help move these projects forward and stressed the importance for the city to implement this project. Scott Griggs, former president of the FWADG and council member for District 3, also spoke in support of the effort, while the Mayor congratulated the group and asked that more public and private partnerships like this occur throughout the city to help larger portions of the bike plan become reality. According to Dallas planning director, Theresa O’Donnell, the project will be expedited and should be installed by July of this year.

We’ll be celebrating this Friday, January 6th, at 6:30PM at the Bar Belmont. Join us for drinks and a group photo with the giant check! Click here for the Facebook invite.

Again, we want to acknowledge all of the local businesses and organizations throuhgout the corridor who contributed to the cause and helped make this campaign a success: