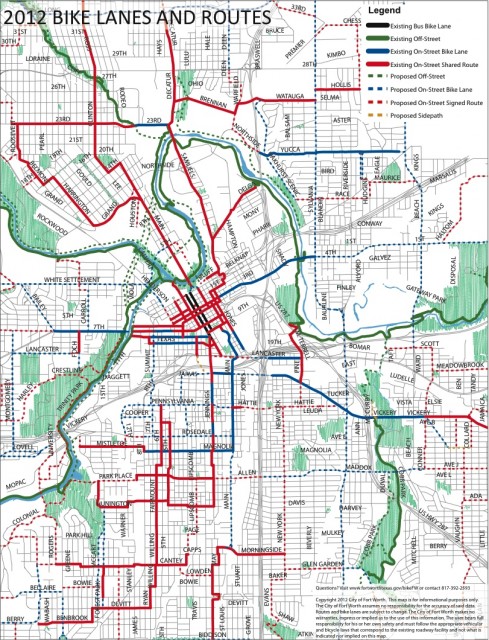 Thanks to the City of Fort Worth for passing this along – it’s a fully up-to-date map of central city Fort Worth bike infrastructure, as of this moment. Solid blue lines are on-street bike lanes, solid red lines are shared lane routes, solid green lines are off-street trails, and dashed lines are planned installations of their respective types. (Plus the solid black lines downtown, which are the Houston & Throckmorton shared bus/bike lanes.)

This really shows how far Fort Worth has come in a very short time, as the majority of these routes have been added quite recently. I figured the map would be quite useful to a lot of Fort Worthology readers, so I made the JPEG version above – and I’ve set up a download link to a PDF version that also includes the city’s list of bicyclists’ rights and responsibilities.

Just so you know, we’re jealous and happy for those bicyclists in Ft. Worth who have seen a huge increase in bicycle infrastructure in one of the most conservative cities in the country.  We’re not angry that Dallas STILL doesn’t have one mile of on street bicycle infrastructure, or that even giving money to the city encourages our May 2011 passed Dallas Bike Plan to grow.  The city says it doesn’t have the money.  Well, cash strapped cities across the country still seem to be growing their bicycle plans per the above article.  It’s been over a year now and, yes, we have bike sharrows on MLK.  That’s a very small step forward, but for new bicyclists and those that are veterans, there are still dangers that lead to horrible accidents.  The system needs to grow quicker.  Bicycle infrastructure has statistically been shown to lower the risk of bicyclist vs. vehicular accidents.  Here’s hoping that this is the calm before the storm.