How to create an uninviting and unloved public space

“It is difficult to design a space that will not attract people. What is remarkable is how often this has been accomplished.” – William Whyte

There are a handful of exciting public space projects on the horizon in North Oak Cliff that will soon dot a stretch of Seventh street, creating an inviting pedestrian/bicycle experience that connects neighborhoods to destination points along the corridor with three planned plazas. A Bishop Arts Gateway that will act as the soon to arrive streetcar stop on the East side, Rosemont Plaza which will act as a resident oriented plaza on the West side, and a centralized public square in the center at Tyler street that addresses an extremely dangerous 5-point intersection. This corridor was the former streetcar line which ran parallel to Davis street and created a natural pathway from the neighborhoods to the commercial corridors along Seventh street.

So how do you create an inviting and engaging public space that requires little maintenance and administration? Let’s first cite an example of a poorly designed public space to see what not to do: 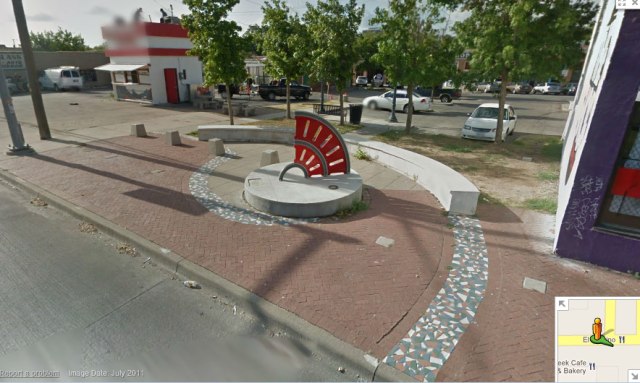 I’m referencing this project because it’s often cited by an area property owner as to why public space projects are failures. Also, the owner cites the “private space” as being a better steward of the land, though one could simply drive up and down Davis Street in North Oak Cliff and point out endless private edge failures. On closer inspection, it’s fairly simple to see why the Bishop Arts pocket park is unused. First off, let’s address the basics:

West side: Non-active edge of building

When creating public space, there are a handful of focus points that must be addressed to help create an active area which include:

Here’s a break down of the grade for each: 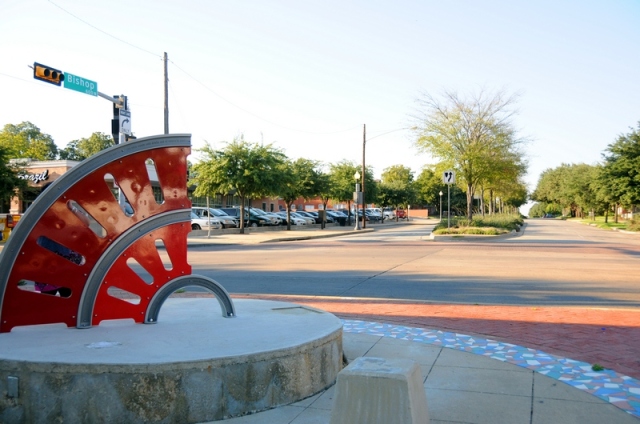 Right off the bat, you’ll notice the pocket park faces Bishop and Davis Streets. If you are a parent with small children does this edge look or feel safe as a place to linger? At night, car lights will be facing you, and no separation (outside of the curb) prevents a vehicle which is t-boned at this intersection from encroaching onto the public space.  Paris is known as the “City of Bollards”, it also provides some of the most engaging outdoor spaces in the world, as well as some of the most simple.  These inexpensive and well placed bollards provide a simple separation between vehicles and pedestrians that immediately elevate the streets perception of safety:

Four small concrete bollards do exist in the pocket park but break up the space at the half way point (near the 20′ mark) as opposed to lining the curb making more usable space. Other elements to note are that the eastern edge has no shade which makes the park basically uninviting during half of the year from 8AM to 4PM. If the goal is to have people sit outside, we must at least provide protection from the sun. Ironically, trees do line the South edge, which give little to no shade for the concrete bench and actually obscure the view to the District itself. At night, there is no pedestrian oriented lighting, making the space feel uninviting and potentially dangerous.

This area was obviously planned for pedestrians, has little invitation for other modes of transit (bicycles, public transit), and offers no real gateway connection to the District unless an individual  plans on walking along Bishop and entering a parking lot before arriving at the destination. We also want to look at the potential for businesses along the edge to easily gain access to the public space and benefit from its presence (thus providing an incentive to maintain). In this instance, a small concrete semi-circle bench/buffer cuts off much of the usable space available for the building to the West, while the small food stand to the South and East is also blocked off.

One thing to note: A single bike rack would help create an inviting presence for cyclists into the district and show-off the area as a bike friendly block to people driving along Davis.

Lastly, we want the space to encourage people to linger and invite friends out to use. We’ve already addressed the lack of shade, but beyond that the only compelling reason to visit this pocket park is the abstract sculpture. You have to ask a couple of questions when encouraging stay power: Who are you attempting to invite? Is the space inviting to 8/80 year olds (if you focus on these bookends, everyone else will feel welcome)? What is there to do once you arrive? And, what compels you to return? Now, from the start, I’m not a huge fan of using abstract art in gateways. It requires interpretation which children will immediately disregard, and is better appreciated on art museum grounds or design districts (places that focus on adult art appreciation). 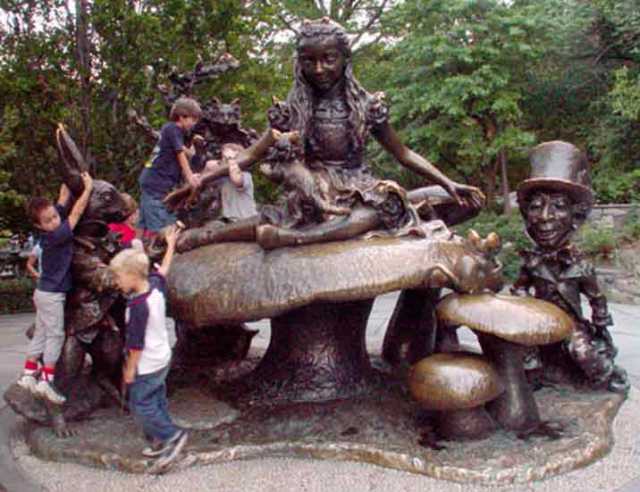 Notice the non-interpretive Alice in Wonderland statue in Central Park, New York. Children love it, it creates an inviting presence, and it ends up being a destination for families. It accomplishes art, invitation, and destination in one fell swoop. It’s also surrounded by shade and benches. In the Bishop Arts pocket park, once you’ve seen the statue, nothing compels you to return. There’s nothing new to read, no information on what exists in the District, and no amenities (outside of a concrete bench). If the audience for the existing statue is more for passers-by, then place it in a traffic circle in the middle of Seventh and Bishop. That way, it’s got greater visibility, helps slow traffic, and isn’t something something someone needs to walk directly in front of.

One of the most common uses for public spaces is a place to eat or read. Something immediately lacking in the Bishop Arts pocket park are tables. There’s no where to set your plate, newspaper, or game board.  Again, it’s not difficult to create a public space that people will use, we just seem to create them all of the time. I think that much of the reason is due to the fact that we focus on making these areas engaging to auto users who are passing by the area, and not truly adapting the space for pedestrian comfort and function.

Now let’s look at another plaza in a similarly sized space that addresses people in a smarter way:

The above is a portion of Silver Plaza in Silver Spring, Maryland. A couple of simple things to note are the amount of shade trees throughout the space and an umbrella to the right. Also, you’ll note bollards along the curb (enhanced safety), lighting, movable seating and tables (stay power) and a business that can engage and manage the space properly (shared access). If the planters are too administrative, fill them with rocks and drought tolerant plants. What you don’t see is a small water feature which is directly to the left of this image that invites children to play. You don’t even have to be as elaborate as a spray chute…simply place a boulder that pools water and allows a place for people to water their dogs when they walk by:

This provides a respite from the heat and a place that has a function which you could easily return to.

So what are some easy fixes for the Bishop Arts pocket park? You could place something as simple as four large empty planters along the North edge, a community bulletin board in the center, a teeter totter under the south shade trees, plant a single shade tree directly to the side and East of the sculpture, re-orient existing park bench to face the teeter-totter, 1 bike rack, 1 pedestrian light, 1 trash can (existing), and movable tables and chairs (the assumption often made is that these will get stolen…what has been shown in reality is that this very rarely happens).  Ideally you’d eventually remove the concrete sitting wall to open the space up and engage the buildings directly beside the park. Later you could add a water fountain for dogs. Create the feeling of a safe and inviting enclosure that has stronger visible connections to the district.

To make things even simpler, if you are beginning a public space project, start with these four elements: Paint, bollards (can be planters), tables/chairs, and shade (trees or umbrellas):

From there, increment change and test ideas to see what works and what doesn’t work. Find a way to allow food into the area (either via food trucks or existing area restaurants). Keep adapting the space as it will always need to change with the times. Remember, a great city can be measured by the number and quality of its public spaces.

#earthday50 Challenge: find a neighborhood destination to bike to. The world is so much more beautiful when you can #tryparkingit & bike it instead! Especially now that there are fewer cars on the road. Good for the earth, your health & your pocketbook - and you might even see a neighbor you recognize,meet someone new, or find a business you never knew was there... I have so many great memories biking. It’s become an inextricable part of my life and I’m SO thankful.
We have a bike & scooter corral in Bishop Arts!!! Ribbon Cutting March 14th 3:15pm as part of the #paletasybicicletas ride from Lake Cliff Park. The entire family can now park their wheels together by the @bishop_street_market_ mural at 7th & Bishop. It took 5 years of planning and following up with multiple changes in City Staff and 2 (awesome) Councilmen @chadwestdallas & Scott Griggs - and we finally got it! We hear they’re going in all over the city now too. The more we make room for bikes and scooters (parking, riding, in the street right of way, on trails) the more useful they can be in de-carbon ozone our transportation system and making safer neighborhoods. . . #bikeparking #bicycles #bikefriendly #bishopartsdistrict #bishoparts #tryparkingit #citizenoftheworld
We had 2 bikes donated last week 💕 Ever wonder how we are able to give away 30+ kid's 🚲🚲🚲 bikes at ¡Paletas y Bicicletas! every year? It's thanks to generous neighbors & donors like YOU!!! We accept 💵 donations as well as bicycles. Follow the link in our bio to make a monetary 💰 donation or shoot us a mesaage to donate your previously loved bike 😊
Save the date for our 6th Annual ¡Paletas y Bicicletas! March 14th at 1pm! Here's your sneak 👀 peek at the event poster! We will be accepting donations from now until the day of the event for kid's 🚲 bikes and helmets = only $100 to make a kid's dream come true!!!
Bastille Y’all! We had a great day hosting free bike parking at #bastilleday🇫🇷 with @bikedfw to promote the upcoming bike corral..... Stay tuned for the details! . . . . #dallashistory #dallas #dallastexas #oakcliff #oakclifftx #bikefriendly #bfoc #bikeparking #bikedallas #lareunion #bishopartsdistrict @bishopartsdistrict @bishoparts @bishopartsdistrictdallas #bikedfw #bikefriendlyoakcliff #bastilleday #bastille
We’ll be hosting the bike corral at #bastilleonbishop again this year with our friends from @bikedfw - can’t wait to see you all there! Sunday July 14th, 5-11pm