Not sure Mayor Mike will be in attendance, but if you want your own voice to be heard about how we as a bicycling community can shape our cities’ future, you need to try and attend the first Dallas Bicycle Task Force meeting tomorrow.  Councilmen Kingston, Griggs, and Medrano are heading up what the city has failed to do yet since it completed and approved a May 2011 Bike Plan to bring the city bicycling infrastructure into the 21st century.

So far, the going has been slow in getting more infrastructure in place, but Oak Cliff has already received some of the most new bicycling infrastructure in the city, because BFOC has done a great job leading the way in making it so.  We obviously have a ways to go, and the lead finally being taken by our elected officials is a breath of fresh air. 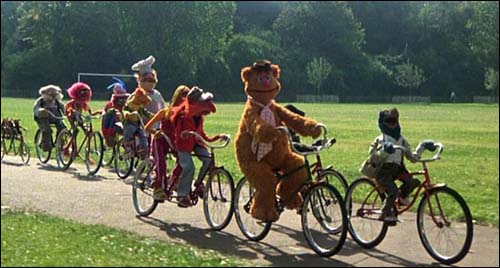 Because the world is better off with Muppet’s on bicycles!

Here are the meeting details:

Meet us at MSG or at City Hall for the meeting (I’ll forward meeting room details and building access information shortly). Please invite anyone you think would be helpful. The agenda for the first meeting will be

1. Structure of the Task Force

High likelihood of beers after the meeting. Call my cell phone with questions. 214-642-1707