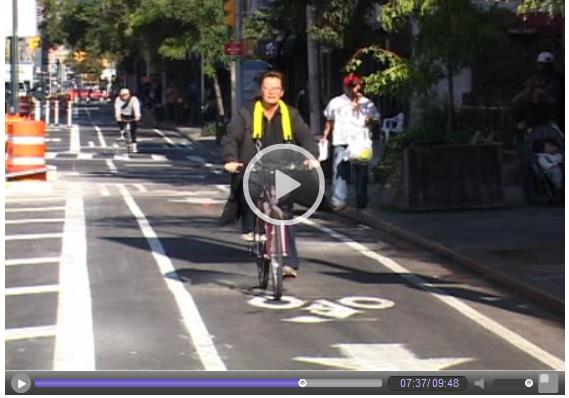 This video is an alfresco interview with Danish planner, Jan Gehl, in a new plaza that he helped develop for New York City. We’ve featured Jan in the past, and have noted how NYC hired his firm to develop their new public space plan. In the interview, Gehl notes that before he started working there, the quality of the city had not been challenged for 30 years. It’s amazing to see what has been rolled out in three short years, and how it has dramatically changed the landscape. He also discusses the bicycle lane implementation, and how the infrastructure addition took back the streets from the cars and returned it to the people. This is a major point we stress at BFOC when discussing bicycle lane and boulevard development. It’s not merely a way to allow cyclists safe space to ride, but the implementation changes the overall psychology of a street, making it notably focused on people. It’s one tool of many that cities experiencing major revitalization and redevelopment have used with great success (ie. Portland, Austin, Boulder).

Dallas is set to announce a bid to bring in a consultant to create our area’s comprehensive plan. We hope the search goes well beyond the national level, as very few planners in the US have the amount of experience agencies in Europe and elsewhere have in implementing successful citywide programs. Gehl’s firm alone started in the early 1960’s, and has not only created the incredible Stroget pedestrian plaza, and NYC’s new public spaces plan, but San Francisco’s Fisherman’s Wharf, and now Mexico City’s comprehensive plan. We have an amazing opportunity to create a model city for the 21st century. At the very least, it’s imperative that whoever we hire has experience well beyond the conceptual, and is willing to think far beyond the status quo.

← Pictures from Sunday’s CliffFest
Curious about bicycling to work? Join us Thursday mornings for a weekly downtown ride →
Join 5,605 other followers