In the 1950’s, South Dallas’s BonTon neighborhood was the site of turmoil and perseverance. Earlier in the decade, ten area homes were bombed as the civil rights movement was beginning to gain momentum. By the mid-50’s the area would become one of the nation’s most hopping R&B spots. At its zenith, the legendary Ray Charles moved to a small house on Eugene Street where his living room became the impromptu gathering spot for community jam sessions with major players like David “Fathead” Newman, Leroy Cooper, and James Clay.

Jason Roberts will lead another historic group ride through the neighborhood spotlighting sites of the 1951 bombings, the homes of Ray Charles and Fathead Newman, and the historic Woodman club. The ride will continue across the Cedar Crest bridge where Team Better Block will hold a “Better Bridge” demonstration, with half the bridge being set aside for pedestrian and bicycle accommodations. The ride will culminate at the Blues, Bandits, and BBQ event in Lake Cliff Park where live music, BBQ, and activities will take place throughout the park. 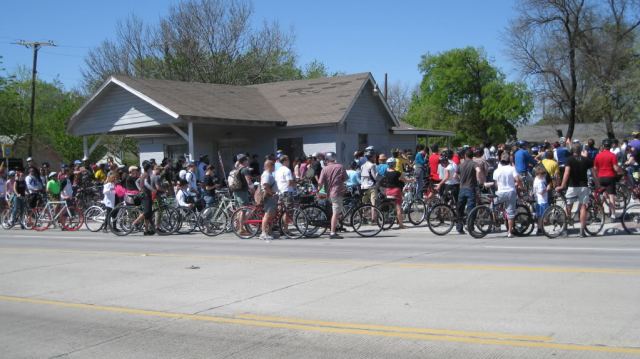 We have a bike & scooter corral in Bishop Arts!!! Ribbon Cutting March 14th 3:15pm as part of the #paletasybicicletas ride from Lake Cliff Park. The entire family can now park their wheels together by the @bishop_street_market_ mural at 7th & Bishop. It took 5 years of planning and following up with multiple changes in City Staff and 2 (awesome) Councilmen @chadwestdallas & Scott Griggs - and we finally got it! We hear they’re going in all over the city now too. The more we make room for bikes and scooters (parking, riding, in the street right of way, on trails) the more useful they can be in de-carbon ozone our transportation system and making safer neighborhoods. . . #bikeparking #bicycles #bikefriendly #bishopartsdistrict #bishoparts #tryparkingit #citizenoftheworld
We had 2 bikes donated last week 💕 Ever wonder how we are able to give away 30+ kid's 🚲🚲🚲 bikes at ¡Paletas y Bicicletas! every year? It's thanks to generous neighbors & donors like YOU!!! We accept 💵 donations as well as bicycles. Follow the link in our bio to make a monetary 💰 donation or shoot us a mesaage to donate your previously loved bike 😊
Save the date for our 6th Annual ¡Paletas y Bicicletas! March 14th at 1pm! Here's your sneak 👀 peek at the event poster! We will be accepting donations from now until the day of the event for kid's 🚲 bikes and helmets = only $100 to make a kid's dream come true!!!
Bastille Y’all! We had a great day hosting free bike parking at #bastilleday🇫🇷 with @bikedfw to promote the upcoming bike corral..... Stay tuned for the details! . . . . #dallashistory #dallas #dallastexas #oakcliff #oakclifftx #bikefriendly #bfoc #bikeparking #bikedallas #lareunion #bishopartsdistrict @bishopartsdistrict @bishoparts @bishopartsdistrictdallas #bikedfw #bikefriendlyoakcliff #bastilleday #bastille
We’ll be hosting the bike corral at #bastilleonbishop again this year with our friends from @bikedfw - can’t wait to see you all there! Sunday July 14th, 5-11pm
In case you need an excuse to hit the trails next Saturday! 🎯