The kick in the pants we needed as a city to rev up the implementation of the 2011 Dallas Bike Plan has spurred more entities to help in getting wet paint on asphalt.   Robert Wilonsky reports today that the Central Core Connector has received small, but significant funding from two local TIF entities to help get that project shovel  ready.  Below is the entire article re-posted: 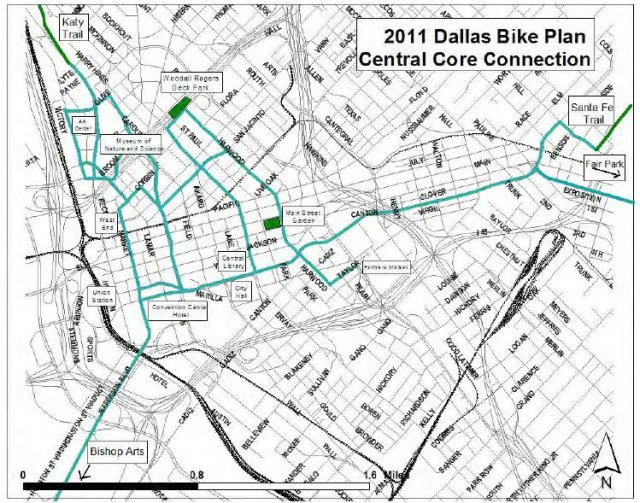 Clearly, being ranked The Worst City for Bicycling in America was good for something after all. At least, that’s the sentiment of some bike-lane peddlers who look at next week’s City Hall to-do list and see that change is on the horizon. Spare change, specifically, which will go toward funding the 3.9-mile section of the Central Core Connector Project outlined in the 2011 Dallas Bike Plan that links the Santa Fe Trail and Katy Trail through downtown.

The Deep Ellum TIF District will kick in $7,574 toward the project. The Downtown Connection kick-in’s a little more substantial: It will vote to reallocate $14,201 “of remaining funds from the Downtown Connection Surface Parking Lot Fencing Project completed in 2007″ toward the Central Core Connector Project. Which won’t pay for the whole thing: Keith Manoy, one of the city’s senior transportation planners, says the project will cost $90,000. Still, he says, between this money and other dollars being raised via partnerships with Dallas County and other entities, including that fundraising effort by the Dallas Parks Foundation, expect to begin seeing more painted shared-bike lanes before year’s end.

“Connecting the Katy Trail with the Santa Fe Trail is critical, and that’s what this is all about,” he says, pointing out that the other piece of the Central Core Connector Project — toward Oak Cliff over Jefferson — is already funded and ready to roll. “So [the Office of] Economic Development has stepped up to help with those projects by moving those funds and cobbling it all together. Most of the money’s in place, and the City Manager’s office is working to find the rest and help pull this all together. The goal is to have it in place by the fall.”

“I think that’s wonderful,” said Jason Roberts when I called to inform him of the news. Roberts, after all, was among those interviewed for the Bicycling piece, and at the time he was mighty critical of the city’s inability to lay down lanes for the two-wheeled set.

“This is the direction we need to be heading in,” he said. “It’s a great step in the right direction. And I think Keith’s great. I wish the city had 10 more Keiths out there.”

Manoy, who’s also responsible for the city’s still-one-and-only shared lane along Martin Luther King Jr. Boulevard, whoa-whoa-whoas those who’d give him too much credit.

“I am trying to do what I can to assist,” he says. “It takes a lot of people to make this happen. But we’re moving positively, putting in for grants, doing what we can. And it’s looking good.”

← Stop everything – call Senator Hutchison about bike funding now!
TONIGHT: Show up to support Bike Lanes on Ft. Worth Ave, pass it along! →

We had 2 bikes donated last week 💕 Ever wonder how we are able to give away 30+ kid's 🚲🚲🚲 bikes at ¡Paletas y Bicicletas! every year? It's thanks to generous neighbors & donors like YOU!!! We accept 💵 donations as well as bicycles. Follow the link in our bio to make a monetary 💰 donation or shoot us a mesaage to donate your previously loved bike 😊
Save the date for our 6th Annual ¡Paletas y Bicicletas! March 14th at 1pm! Here's your sneak 👀 peek at the event poster! We will be accepting donations from now until the day of the event for kid's 🚲 bikes and helmets = only $100 to make a kid's dream come true!!!
Bastille Y’all! We had a great day hosting free bike parking at #bastilleday🇫🇷 with @bikedfw to promote the upcoming bike corral..... Stay tuned for the details! . . . . #dallashistory #dallas #dallastexas #oakcliff #oakclifftx #bikefriendly #bfoc #bikeparking #bikedallas #lareunion #bishopartsdistrict @bishopartsdistrict @bishoparts @bishopartsdistrictdallas #bikedfw #bikefriendlyoakcliff #bastilleday #bastille
We’ll be hosting the bike corral at #bastilleonbishop again this year with our friends from @bikedfw - can’t wait to see you all there! Sunday July 14th, 5-11pm
In case you need an excuse to hit the trails next Saturday! 🎯
Since our Monthly Meeting falls on Election Day, we decided to 🚲 to the polls! So if you need a little motivation to vote, wanna encourage a friend or neighbor to vote, join us Saturday morning! 10am Coffee at Davis St Espresso 10:30 Roll out to your poll with BFOC We don't care who you vote for, we just want our neighbors to VOTE! Even if you've already voted, invite a friend or bring your kids as we #RollToThePoll!