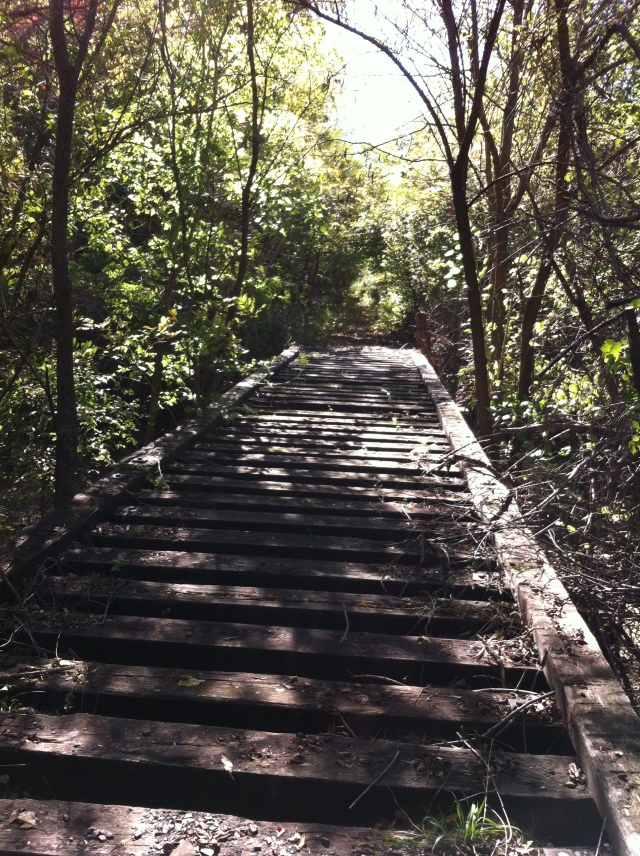 The trail least traveled yields the most adventure!

I love rail corridors that are no longer in service, have been rail banked, or abandoned for private purchase.  They have layers of history that end up over lapping with new ones when rail trails are developed, like a palimpsest does.  They provide a glimpse into our past when this form of transportation dominated our country’s landscapes, our industries, and was the most often used form of transportation.  In our area of the nation’s prairie land, we have a fair share of these rail corridors.  However, one in particular is special and provides a unique adventure unlike no other can in North Texas.

The land for the NETT and other rail-trails was first made available by the National Trails System Act in 1983.  At no cost to the rail bank entities, it preserves established railroad right-of-ways for future reactivation of rail service, protects rail transportation corridors, and encourages energy efficient transportation use.  Trail advocates along the entire route have been developing plans and fighting court battles with some land owners since the 80s.  Now, quite a bit of the trail has been developed by several of the rail banking agencies that oversee it’s development.  The NETT is now a functioning, 501c3 non-profit able to accept donations to continue it’s development into the future.

I’d been hearing quite a bit about the NETT since growing up in Collin County, where Farmersville is located.  However, it wasn’t until I recently watched Dean Nix, a local cyclist and all around bad ass, talk about being the first to ride the entire distance from end to end and back, a total distance of 260 miles.  He did it in 3 days by the way!

Anyway, I heard through my Bearded Women Racing team members that Spinistry, a local race promoter, was organizing the first cycling event to ride the trail.  I have a full mountain bike racing season on my legs, so I took the challenge to ride the full 65 mile distance from Farmersville to Paris, one way, so I could be back in time for a mountain bike race the following day. 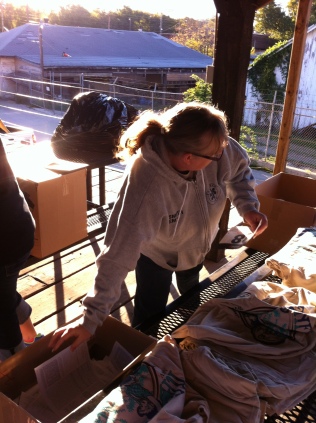 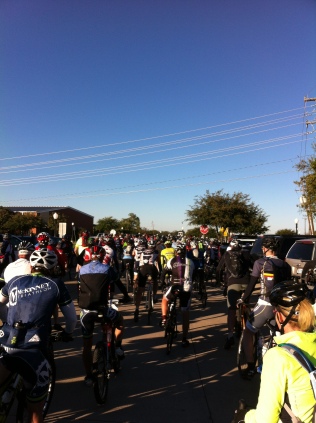 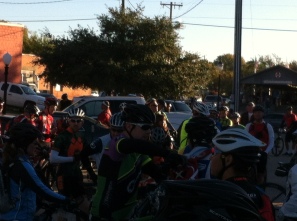 Over 200 riders showed to participate 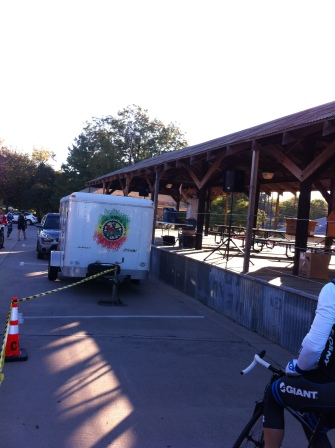 Rail station where farmers loaded their onions onto the train 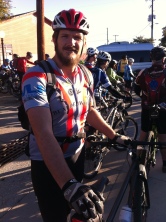 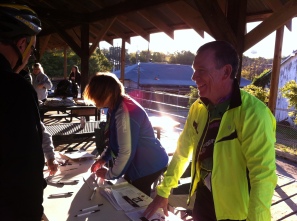 Volunteers helping at packet pick up 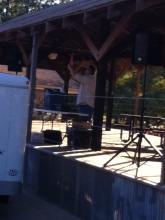 After a warm up start through Farmersville quaint and attractive downtown and onto local county roads, the ride put us on the first section called the Chaparral Trail .  The segment is owned by the city, and they’re very proud of their work to date on making it a true city trail.  They have lighting, benches, recently installed sod and other landscaping like you’d see on any local city trail.  The difference is that it’s not paved, a good thing for long term maintenance and use.  What make rail beds the ideal trail lies just at the surface.  Rails were built with rail ballast, tons of small portioned rock that drains very well and provides a solid foundation for the ties and steel rail.  When the ties and steel are removed, you can simply lay down layers of trail material to make it into a mult-use trail that everyone can enjoy!

Once we past through this section and out of the city owned section, the trail quickly showed it’s true grit. Think unimproved jeep trail in most sections, and that’s what the trail looks like.  We ran into a section where someone had removed a chunk of the rail ballast for some unknown reason.  This was the only section where standing water and mud was an issue.  A distance of probably 50 yards or so.  Most riders were either on mountain bikes or cross bikes.  All of the mountain bikers made it through this section with ease, however a few of the cyclecross riders did not ;).  Other than a bit of mud, the only other brief impediments are the multiple rail bridges.  We were instructed at the pre-ride meeting to not ride them, get off the bicycle and walk it.  Most of them are definitely NOT ride able, though a handful make for a fun, bumpy traverse.  You’ve got to be aware of the loose and brittle ties and the gaps between them.  They certainly made the trip more interesting, as your mind wanders back the over 150 years or so when they were first erected to ensure the train made it’s stops on time along the entire route. 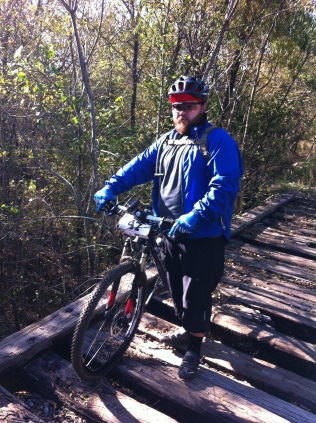 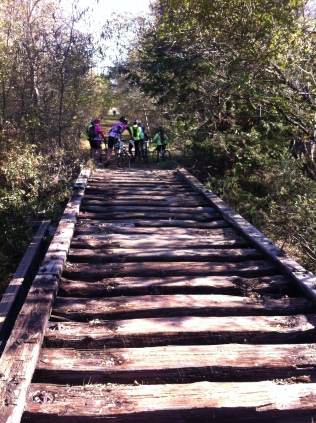 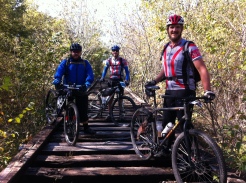 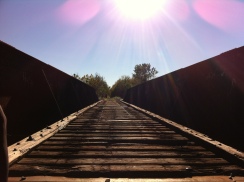 I suspect that the NETT group will focus on repairing and making these bridges safe and ride able in the near future.  However, one in particular made me stop and remember that I’m afraid of heights, before I did a tight rope like walk across a 6 foot gaping hole.  This particular bridge crosses the Sulphur river, one of the main tributaries in North East Texas.  The bridge lies between Pecan Gap and Franklin, a designated un-passable section of the trail per the NETT group.  Anyway, the section you see in the following picture is the gap in the Sulphur bridge crossing. 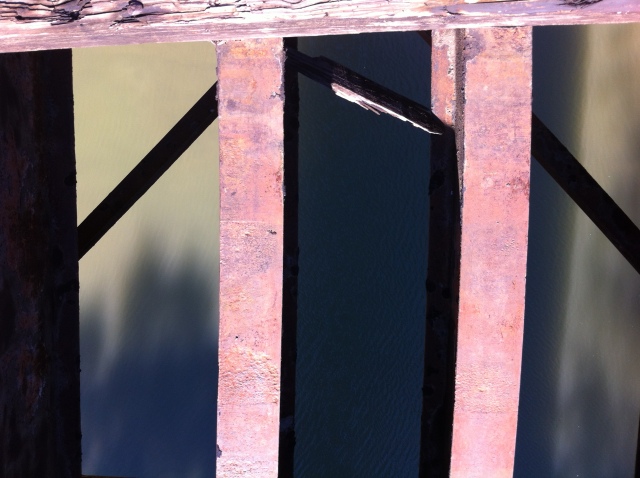 Here’s a look at the gap from another angle.. 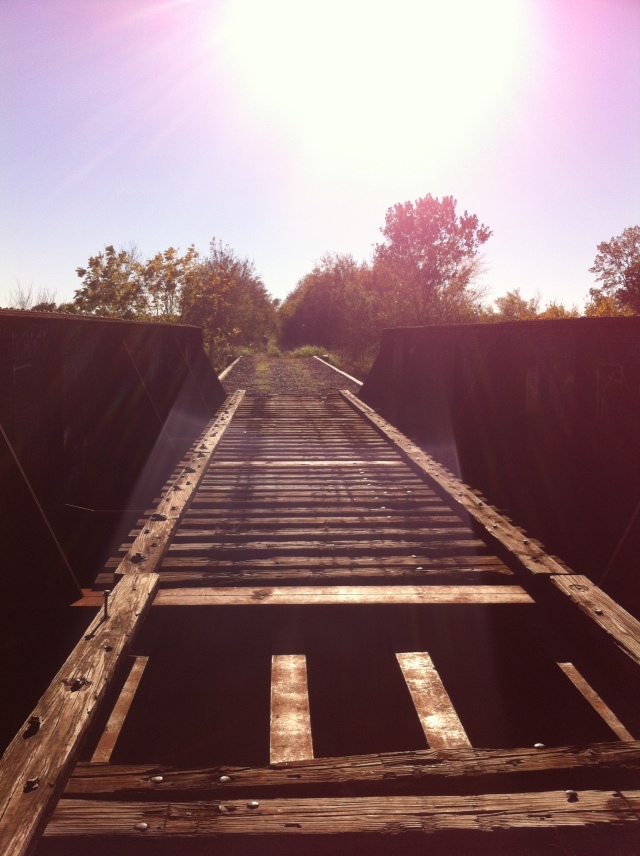 Besides the adventure crossing these rail bridges, some of the most interesting sections of the trial came with the over growth.  We prepared ourselves like most riders would not that day by bring a few tools to help us make our way through anything we came upon.  I tied a machete to the side of my mountain bike and welded it like a soldier in the cavalry would have down.  While not necessary to traverse these sections, it was a blast to do.  Really, most of it can be bushwhacked by simply riding through it and avoiding the treacherous Honey Locust tree that have huge 3-4 inch thorns reaching out over the trail like spider webs ready to puncture any tubeless tire it comes across.  30 years or so since the National Trail Act leaves plenty of time for some gnarly over growth to leave it’s mark!  I definitely recommend having tubeless tires through most of this section of the trail, but not necessary. 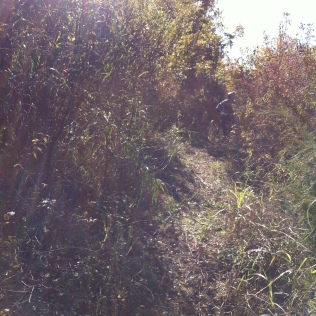 Over growth between Pecan Gap and Roxton 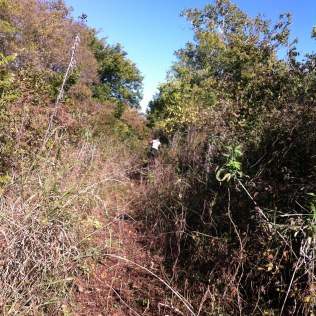 My teammate is only about 20 yards away! 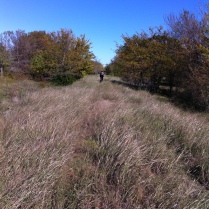 If the rail ballast were gone, we wouldn’t have even recognized this as the trail 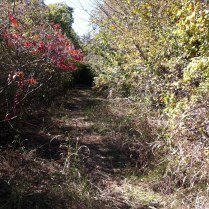 A tree tunnel that has formed prior to Ladonia 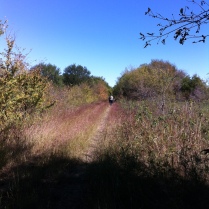 Great Fall colors along the trail

Our adventure took us through some great, little slices of Texas’ beautiful country side.  Along the way we saw active farmers and ranches doing the same things they’ve been doing when the trail passed regularly, and kept the small towns economically viable and perfect places to raise a family and earn a living.  Now, the rail trial can pump new economic development back into them by adventure seekers ready to traverse the trail.  You can contribute by spending money in each town you pass through, filling up your car, eating at Pecan Gap’s all you can eat catfish buffet or another restaurant along the way or simply donate to the NETT.  Be apart of this resurgent effort to create a beautiful recreational resource for everyone to enjoy!

← Street Art Bike Tour with the Dallas Contemporary
Would You Like to Be on the BFOC Board? →