The efforts of those of us who call themselves “bike advocates” in Dallas can commonly feel like fruitless labor. We too-often find ourselves on the wrong end of the awards list when it comes to surveys, polls, and quality-of-infrastructure lists anytime we pick up a magazine or click on a Facebook link. It should reasonably surprise no one that so many of our own blog posts shared here assume a tone of frustration and negativity – and deservedly so. But, in the last few hours of 2014, we’d be amiss if we didn’t take a moment to graciously reflect on a few things that our Fair City did manage to get right this year without the usual pall of imminent doom.

Even after decades of bad policy and worse infrastructure decisions, we shouldn’t completely ignore the feeling that things are, just maybe, moving in the right direction. No, it ain’t all milk and honey just yet, but all those 19-page surveys, group rides in oppressive heat, online petitions, and city council meetings (and meetings and meetings and meetings) have earned us a few wins. So, as a little overdue positive holiday cheer, here’s a short list of things that the BFOC family agreed went right this year:

The completion of the Trinity Skyline Trail

What began as a conversation between Angela Hunt and Scott Griggs (and later a simple path tamped and mowed into riverbanks by DORBA stalwarts Dave Gray and Paul Hakes) was finally realized in 2014 as a fully paved bike and pedestrian trail tracing both sides of the Trinity inside the levees. It’s the first solid infrastructure we’ve seen in this area of the floodway that’s slated for some ambitious park development, and it couldn’t have arrived soon enough. The trail connects Crow Park at the new Sylvan bridge in the Design District down to the Santa Fe Trestle bridge, where you can cross the river and follow it most all the way back up to the new Continental Bridge park. Although the Skyline Trail has technically not fully opened, it already sees daily use as both a recreational and commuter connector to cross the Trinity away from motor vehicle traffic.

Repeal of the helmet ordinance 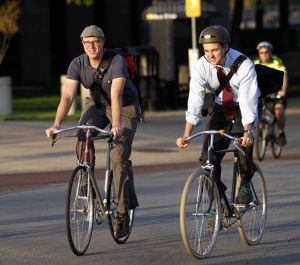 In what may be the most pleasantly surprising action by city council, a 1996 ordinance requiring cyclists to wear helmets on city streets was eased to allow those over 17 years of age to ride neighborhood streets without fear of citation. Dallas’ ordinance, now in line with most major metro cities in the US, figures to ease the barrier to entry for the maybe-forthcoming city wide bike sharing programs akin to what we see in Fort Worth, Austin, San Antonio, and Houston. While BFOC still encourages helmet use, the ordinance went largely unenforced in most areas of the city, according to citation data, so council saw fit to do the right thing. If the post-ordinance pattern of ridership data from other major US cities holds true for Dallas, we can expect this to have a positive impact on our own numbers here at home. We’re all for the choice of personal responsibility, and hey, we’re confident we can find something else to chat about with Officer Gordon.

With the abrupt departure of Max Kallhammer not too long after the Dallas Bike plan was passed, speculation went wild about who would be chained to the post that was seemingly unfit for any bright-eyed transit planner bearing ideas that were less than 50 years old. The Dallas Morning News anointed Ashley Haire the new ‘Dallas Bike Czar’ roughly 90 seconds after her hiring, and it wasn’t much later that she and teammate Transportation Planner Jared White were overseeing as much bike-friendly road striping as we’ve seen in a decade. We can only hope since she’s a legit engineer who hails from the bike lane holy-lands of both Austin and Portland, that council can shut up and listen to her advice when it comes to matters of design. Ashley has been closely engaged with the newly formed Dallas Bicycle Coalition since its inception, and, based on her comments, has a solid grasp of the cultural attitudes that North Texas bike commuters face daily that make Dallas all the things that Portland ain’t. Good luck, Ashley. Welcome to Dallas. We’re rooting for you.

Assembly of the Dallas Bicycle Coalition

We must tip our hats to Councilmen Phillip Kingston, Scott Griggs, and Adam Medrano for greasing the wheels leading to the formation of the Dallas Bicycle Coalition. The coalition was later organized as a group of citizens who engage (both to inform and give feedback) with city staff on our behalf every month as Dallas struggles to get the planned projects on the ground. The Dallas Bicycle Coalition is comprised of cyclists from the various neighborhood Bike-Friendly groups that have sprung up around town, and chaired by Oak Cliff’s own Jonathan Braddick. 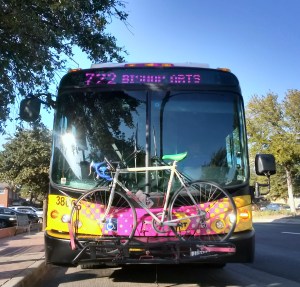 While we wait patiently on the opening of the Oak Cliff Streetcar, the collaboration between DART and the Downtown Dallas Corporation has given commuters the next-best option to get a ride in and out of downtown from Oak Cliff without the car keys when you need it. The recognizable hot-pink bus shuttle requires no fare, runs every 15 minutes, and has brand-spanking-new bike racks mounted to the front of each bus. It might not offer service as early or late (11am – 11:30pm M-Sat) as it should, but bicycles hanging off the front of the ol’ 722 headed to Bishop & Davis are an increasingly common sight. This only leads us to believe the word is clearly out about how easy riding the D-Link with your bike is, or the Bishop Arts valet situation is really as bad as you’ve heard. Hint: It’s probably both.

← Better Block Holiday Market
Cycling the Mean Streets of Oak Cliff: A Guide to Making it Out Alive →

We had 2 bikes donated last week 💕 Ever wonder how we are able to give away 30+ kid's 🚲🚲🚲 bikes at ¡Paletas y Bicicletas! every year? It's thanks to generous neighbors & donors like YOU!!! We accept 💵 donations as well as bicycles. Follow the link in our bio to make a monetary 💰 donation or shoot us a mesaage to donate your previously loved bike 😊
Save the date for our 6th Annual ¡Paletas y Bicicletas! March 14th at 1pm! Here's your sneak 👀 peek at the event poster! We will be accepting donations from now until the day of the event for kid's 🚲 bikes and helmets = only $100 to make a kid's dream come true!!!
Bastille Y’all! We had a great day hosting free bike parking at #bastilleday🇫🇷 with @bikedfw to promote the upcoming bike corral..... Stay tuned for the details! . . . . #dallashistory #dallas #dallastexas #oakcliff #oakclifftx #bikefriendly #bfoc #bikeparking #bikedallas #lareunion #bishopartsdistrict @bishopartsdistrict @bishoparts @bishopartsdistrictdallas #bikedfw #bikefriendlyoakcliff #bastilleday #bastille
We’ll be hosting the bike corral at #bastilleonbishop again this year with our friends from @bikedfw - can’t wait to see you all there! Sunday July 14th, 5-11pm
In case you need an excuse to hit the trails next Saturday! 🎯
Since our Monthly Meeting falls on Election Day, we decided to 🚲 to the polls! So if you need a little motivation to vote, wanna encourage a friend or neighbor to vote, join us Saturday morning! 10am Coffee at Davis St Espresso 10:30 Roll out to your poll with BFOC We don't care who you vote for, we just want our neighbors to VOTE! Even if you've already voted, invite a friend or bring your kids as we #RollToThePoll!