No Better Way to Start the Day!

Sometimes we all need a little extra motivation to get out of bed in the morning and take ourselves to work.

For me, I find the little push I need on two wheels.

I didn’t always commute to work on a bicycle, so I know it can be intimidating and takes preparation. A good step in overcoming these obstacles is knowing a safe route.
I commute from North Oak Cliff to the far side of Deep Ellum. My route begins on the Cycle Track, the divided bike lanes on Jefferson Bridge, which I take into Downtown. The Cycle Track is most safely accessed from Zang Blvd near Lake Cliff Park.


The Bike Lanes on both 5th St and Bishop Ave lead to this area.

At the end of the Cycle Track, I make a right onto Young St and merge into traffic.

The first few times I attempted this route, I continued straight on Market St and turned right on Main St, so that I could utilize the bike lanes. I quickly realized that Main St is uphill going west to East. And with only one lane of traffic going each way, a slow cyclist creates a traffic jam for other commuters.

Young St however has three lanes of traffic going in each direction, so motorists are able to pass. From there I continue by City Hall and the Central Public Library.

After the intersection of Ervay St and Young, the street will essentially go from two lanes to only one. This is due to Parking Meters on the street and cars occupying those spaces.

So be sure to merge into the left hand lane before the next intersection.

From there, I remain on Young St until I enter Deep Ellum (Young St changes names to Canton).

After I ride under the overpasses and into Deep Ellum, I take Crowdus St toward the left to Main St and ride the rest of the way to work on the bike lanes.

And if I’m not in too big of a rush, I can stop by Murray Street Coffee Shop, where they know there’s no need to leave room for cream, but to leave some for potholes. 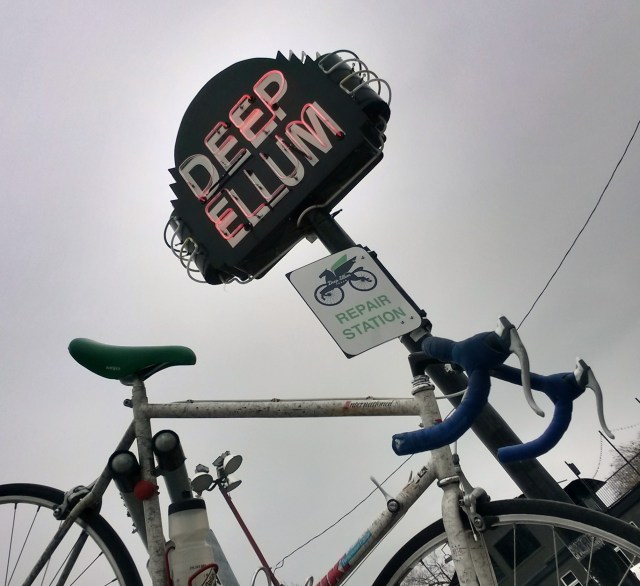 They even have Bike Repair Stands in Deep Ellum!

The return trip is just as easy. I begin on the bike lanes on Main St. in Deep Ellum and head towards Downtown Dallas. Since the lanes are downhill in this direction, I am able to keep up with traffic and I cruise all the way to Houston St, where I take a left.

After Union Station, I make a left onto Young Street and at Market St. make a right onto the Cycle Track. Then, it’s home, sweet home.